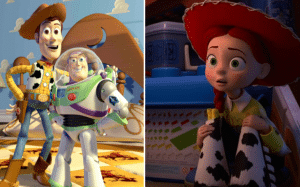 For those who are kids today it is not easy to understand what the advent of Toy Story meant, first in the United States and then in the rest of the world, just over twenty years ago. But the film by John Lasseter was a “first time” in many ways: the first feature film by Pixar, the first entirely computer-animated (so much so that he earned an ad hoc Oscar), the first time by thinking and emotional beings of a group of toys (it is true, for children it is a daily “reality”, but the animated cinema was guilty behind), which will then open the way for a thousand reinterpretations; the first excruciating reflection on what is left behind by becoming great. Sheriff Woody, the space ranger Buzz Lightyear, Mr Potato, Rex and the others, thanks to the success of the film and its sequels, are no longer Andy’s toys, not only: they are the favorite games for many children, every time and where, thanks to a fiery merchandising, cause and effect of a real Toy Story fever.
And from this bond of burning sympathy and affection the creators are not immune, on the contrary: as “parents” of the toys, the Pixar creatives do not stop disseminating their films of images-memories of their first-born, so that it is found almost everywhere, in the Incredibles and in Inside Out, in Wall-E and Monsters & Co.
Now that the wait is already high for the fourth chapter of what, in the meantime, has become a series, the memory runs to the few minutes of Tin toy, short film of 1988, the third filmed by Lasseter for the newborn Pixar, which was in turn a concentrate of novelty and that already contained the themes that would have made the company great. Not only, in fact, the short introduced a child, and therefore a human being (a creature rather alien to the world of animation, also because of very difficult realization), but used the highest number of shots of any other work made entirely in computer graphics until then. As always in those parts, the avant-garde technique did not proceed, however, disengaged from an avant-garde exploration even in the narrative: the tin toy of the title, which comes to life as soon as it comes out of the box and then flees terrified under the bed, for fear of torture that the child can inflict, is the first adventurer of a trip that will be made seven years later with the making of the first feature film, Toy Story, which is the direct result of that first walk on a new planet of animation.