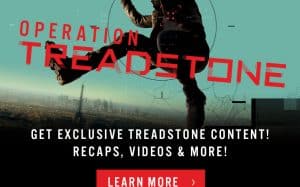 In East Berlin, in 1973, an American agent was reprogrammed to become a deadly assassin activated on command by the Russians, a “cicada”. Today someone is reactivating the sleeping cicadas, which have become part of the Treadstone project, the same CIA program that Jason Bourne participated in. Among them are a North Korean woman; an American working on an oil rig in the Arctic Ocean; a crazy cicada in the heart of the United States, on which the CIA investigates with agent Matt Edwards and the supervision of Ellen Becker. In addition, a North Korean general places a journalist on the trail of a nuclear device, which could be related to cicadas.
Treadstone boasts an interweaving that unfolds over numerous locations and over two timelines, full of brutal melee and chases, but which in its agitation cannot hide its trivial superficiality.
The showrunner Tim Kring has never shone for genius, the author of Heroes and Touch has always been inclined to these great tapestries that unite very distant characters, of very different cultures and with more or less superhuman abilities. But his writing is medium, his introspection in the characters limited and his plot often seems to go around in circles.
In this case, at least they turn whirling, since there are really many characters, each with their own knowledge and dangers to interact with, in an abundance of action scenes that try to replicate the fights of the films of the saga of Jason Bourne. They also manage quite well, but the tribute soon turns into dejà vu when you pass the fifth fight more or less the same as the previous ones. Moreover, at the heart of the story there is no magnetic presence like that of Bourne, repeatedly evoked and never mentioned, who acted with determination and without explaining anything in advance to the viewer.
The silent Bourne of Greengrass’s films thought faster than everyone and therefore also the public, the agents of this series, on the other hand, are in crisis because they have just awakened and react more than act, in a continuous melodrama. In short, they are not surprising, as soon as they stop surprising the many locations: from Colombia to India, from North Korea to East Germany, from China to the Arctic, from Paris to Ghana and from Greece to Russia, they end up being too many. None of them breathe and they are barely backgrounds, introduced by some aerial shots not very different from the postcards of the Alias ​​series.
It should be recognized that the feat was not easy, given that the Bourne saga ran out of gas also in the cinema, where the technically superb last chapter of Greengrass was not a success and where the attempted spin off like Jeremy Renner is so forgettable that not even the series wants to remember.