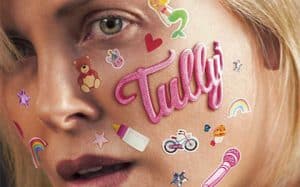 When, after the birth of little Mia, the nocturnal nanny, Tully, shows up at the door of Marlo like the fairy Trilly or like the genius of the lamp, the new mother begins to like the help of that girl full of life and energy, with a prepared physique that reminds Marlo how it was before the three pregnancies.

And it is from the physical unraveling, even more remarkable, since the beautiful Charlize Theron, who plays the role of Marlo, has accepted to gain weight of 23 kilos and alter her appearance as she had done for Monster, the first authentic representation of motherhood in Tully : exposing mercilessly all his physical failures of elderly mothers Marlo visually denounces that malaise that is verbally neglected, but that should be obvious to anyone – first of all the kind but inefficient husband.
Tully is the third film collaboration between screenwriter Diablo Cody and director Jason Reitman, after Juno and Young Adult, and the second starring Charlize Theron. A red thread links the three films, and is the representation of a female who defies politically correct: from the rebellious teen and pregnant Juno to the anarchist writer who refuses to grow Mavis up to Marlo, Diablo Cody (ex-teen rebel and former anarchist author) , now a mother of three children) exposes the contradictions of being a woman to the public’s gaze, trying to break away from socio-cultural expectations.
It is an effort comparable to that of Michelangelo’s Prisons, and also the work of Cody preserves a part of “dull marble”: Marlo, in his claiming the desire to remain a thinking and enjoyable person, tries in Tully a substitute for the traditional maternal role – the nanny cooks the cupcakes that Marlo the next day offers to her son’s classmates, cleans the house and fills the vases with fresh flowers. It would have been far more subversive to show that Tully helps Marlo to care less about being a perfect mother and to accept his rebellious and joyful nature: a little like Ricki’s rocker in Where we were, Jonathan Demme’s latest film, always signed from Diablo Cody.