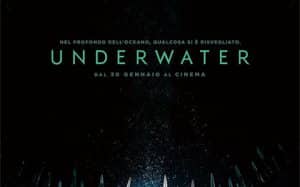 High voltage horror-thriller, Underwater is played by Kristen Stewart and directed by William Eubank, a young director on his first experience with a major but already quite experienced with science fiction. And once again Eubank is grappling with a science fiction story but – to vary a bit on the theme – there are no space, aliens, spaceships or other such cliches because Underwater is set in an underwater research base.

The plot follows the typical pattern that is defined by the slasher-movie, that is, the genre in which an unknown monster / entity wakes up for some reason and begins to decimate the group of protagonists, usually eliminating one by one until you get to the clash final with the last survivor.

It is one of the most classic horror canvases, present in cinema since its beginnings: this time the extra element is the underwater setting which is one of the least explored, at least in recent years. Usually, in fact, the marine setting is more exploited for catastrophic films than for horror films in the strict sense.

Kristen Stewart, in view of the film’s release – which she finished shooting now two years ago, more or less – revealed how happy she is that Underwater is finally ready for the public: “I’m excited. I don’t think I have never made a film of this magnitude before. – he told the american press – It was not an easy film to make – very long and wet, cold, hard. I want to see how we all reacted in such precarious circumstances, it is one of those situations that bring out the best and the worst from people. ”