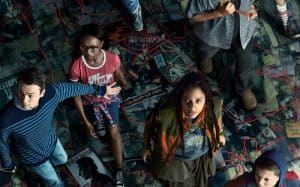 The story revolves around a group of comic book enthusiasts who met online thanks to a common obsession with a seemingly fictional comic called “Utopia”. Ian (Dan Byrd), Becky (Ashleigh LaThrop), Samantha (Jessica Rothe), Wilson Wilson (Desmin Borges) and Grant (Javon “Wanna” Walton) will be able to unearth hidden messages in the pages of “Utopia” that predict a threat to humanity. They will soon realize that this is not just a conspiracy, but real dangers in their world. The group will embark on an adventure that will lead them to come face to face with the famous protagonist of the comic, Jessica Hyde (Sasha Lane), who will join their mission to save the world while hiding other secrets herself.