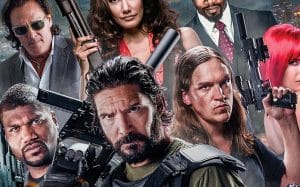 Adrenaline action-adventure film with movie heroes, explosive action, and international espionage. The film revolves around a group of special black-ops agents transformed into combat criminals driven by a meditating anti-hero known only as “The Vigilant.” These overwhelming vengeance missions bring the viewer from the mega-palaces of Los Angeles to far-away places like Iraq, Armenia, Russia and the UK, with a cast of colorful, dangerous and hilarious characters.