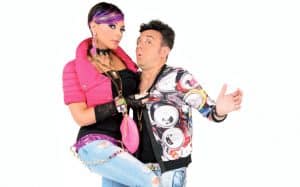 Enzo works as a clerk in a clothing store on the outskirts of Naples. Monica has a salary from acconciatrice that rounds as a beautician door to door. The clandestine victory of a batch to allow internal to the couple, not yet married, to stay at the main Spanish tourist destinations (Barcelona, ​​Ibiza, Formentera) on a journey that will change the lives of the two lovers until further notice.
Life heartbeat, but the agony Italian comedy. Because if Zalone has the strength of being reactionary, we are running instead of the most rosy anachronisms. As Toto and Peppino visiting Milan, the pair of cafonal foreigners who comes from the province finds himself disoriented in a Spain postcard. Smart and fools, protagonists exchange a lamp Wall holy water font, handle the electronic key to their hotel room with the confidence of a man of the Pleistocene, make a lot of ears to the word “monologue”, they fail to recognize, as good Italian, the exhibition of contemporary art and classical music concert, as in the seventies – already behind schedule and without cynicism – saw do with Alberto Sordi in Where are you going on vacation? (I did not move).
Then the viewer will discover that it’s all a sham: the two lucky was stretched a trap and were hired without their knowledge to test a new (!) Reality show which will become full-time competitors. A distance, that wrought by this fiction, behind which there is obviously no political will: pure format, functional narrative only solution to run the easy comedy of feelings naively interpreted by the comedy duo known as Arteteca (Enzo Iuppariello and Monica Lima, couple in real life) along with a cast drawn almost entirely from the program of Made in South, known comedy television show came in 2016 in its seventh edition.