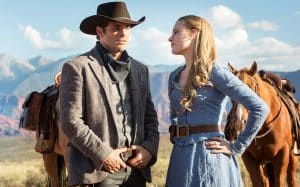 HBO has produced a dramatic show based on the 1973 sci-fi film Westworld.
The TV series Westworld has an exceptional cast: Anthony Hopkins, Evan Rachel Wood, Ed Harris, James Marsden, Thandie Newton, Jeffrey Wright are just some of the leading actors and is written and directed by Jonathan Nolan (brother of Christopher Nolan) . J.J. Abrams is executive producer.
The story is set in a futuristic theme park whose attractions are the robots, apparently very similar to humans. At one point the machine will rebel and begin to attack people.