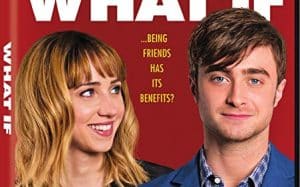 Lisa and Sean, wife and husband, are happy but have a problem: the biotech startup founded by her, albeit brilliant, is short of funds. And if they do not find a solution as soon as possible the two will both be overwhelmed by debts. To solve the problem, at least apparently, and the billionaire Anne, who in exchange for the loan necessary to launch the company asks Lisa a special favor: to lend her husband for a night. The decision that the couple will take that evening is destined to change their lives forever.

Call it the algorithm dictatorship. Or call it with a scarier expression, because it brings with it the signs of decadence: a series of ways.
What / If by Mike Kelley, 10 episodes streaming on May 24th, is a good medium-sized TV product. It has an excellent starting point, a supporting story that holds (for the rest there is forward) and that from the third episode takes off to land on a satisfying end. Without ever taking a real risk, it is the series to recommend to friends in search of a “sure-shot” stream, good for everyone – apart from those under the age of 14 – and easy to take. Like one of those pre-cooked dishes, to put in the microwave when you have little desire to do, that you like because it has a “chemical” yet familiar flavor: it’s not exactly good, but it has trained the palate to recognize it as such. And this is the effect that What / If produces on the viewer: that of an artificial series, built at a table, made to capture the interest of those who no longer know what to click.
The choice of the genre, for example, is not accidental but responds to an explicit strategy of Netflix: to give its users what the cinema no longer offers. Here then is the return of the psychotic erotic thriller, so frequented by the cinema in the nineties (see under the heading Indecent Proposal, Basic Instinct, Silver, Revelations – Sex and Power), which responds to the nostalgic desire of spectators to return to stories, faces and dynamics that have marked the imagination, and that for some time the cinema has abandoned.