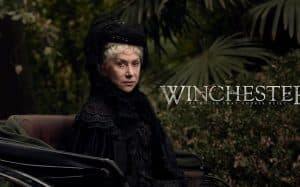 Winchester – The House That Ghosts Built

Dr. Eric Price has recently lost his wife and faith in anything. He spends his days drowning in the laudanum when he is recruited by the Winchester Repeating Arms Company to perform a psychiatric examination of Sarah Winchester, the widow of the arms factory and a fifty percent shareholder in the company. The woman, haunted by the sense of guilt for the millions of deaths that her guns have caused, has moved to San Jose, California, where, day and night, she works on the construction of new rooms in her home, in the belief that they are the spirits themselves to ask him.
The story of Sarah Winchester, irremediably knotted between truth and legend, is one of the most suggestive of its kind, kneaded as it is of the material of which cinema is made: visions, ghosts, beliefs and disbelief.
In 2016, Bertrando Bonello built on these foundations an “opéra fantôme”, between ballet and video art, of short footage but powerful charm. The Australian brothers Michael and Peter Spierig, horror specialists, instead move on a more classical road, being able to count, as a counterweight, on the extravagance that is already inherent in the subject.
Adopting the point of view of an unreliable narrator (obnucated by the poison and the psychic suffering caused by mourning) the directors immediately show they want to operate within the genre, understood in a traditional way, and continue this step with watches that play the midnight and children who walk sleepwalkers at that hour. The meeting at the center of the film, however, is that between the two tormented souls of the protagonists, of which the ghosts that infest the mansion of San Jose could be emotional projections, were it not that the story never rises above the lines and remains anchored the stipulated promise, that of the ghost story, at times confusing the retro setting with a substantial passatism of tone and style, which prevents the film from presenting itself with an additional interest, beyond the game to the most successful fright and to the reconstructed curation and atmospheric.
Helen Mirren, perfectly at ease in the paranormal thriller as well as those of the Queen of England, and Jason Clarke, in the role of the psychiatrist chosen (not by chance) by the widow herself, go from coping to support, with theatrical devotion to the cause, all ‘inside a path written in the beginning, mostly enjoyable, just because of its classicism, but ballasted by some commonplace too. To be a ghost story, it could take us more by surprise.