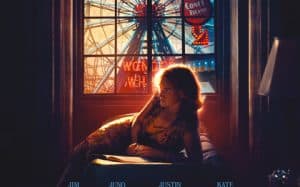 Ginny has married Humpty who works in Coney Island’s Luna Park and has brought him a ten-year-old son with a strong tendency for pyromania. Ginny, however, is dissatisfied with that marriage and finds in the lifeguard Mickey a cultured man who can also understand his ambitions as an actress. One day, however, comes to upset the fragile balance Carolina, daughter of Humpty and escaped from the entourage of the mafia husband. When Mickey learns of it, Ginny warns of danger.

Woody Allen had already mentioned Coney Island’s Luna Park in a joke by Io and Annie when he told his character (Alvy Singer) that he had lived under the roller coaster of that amusement park.

This time it is installed directly by being dominated by that Wonder Wheel that symbolically becomes the wheel of the lives of its protagonists. After the refined and melancholic dip in the Hollywood of the Café Society studios, Woody immerses himself in the drama of small lives of men and women who try to snatch some moment of light from everyday life. Whether it is a fishing trip for Humpty, a relationship to be consumed under wooden partitions between literature and theater for Ginny or as a chance to escape and survive a wrong choice for Carolina.

A light that Vittorio Storaro, in his second collaboration with Allen, picks up from nature and transfers to the characters offering Ginny the reddish tints of the sunset and to Carolina those of the moment of passage towards the night. Thanks to the chromatism of the different attractions of the Luna Park, on more than one occasion the “author of photography” accompanies the changes in feeling with what he calls ‘color physiology’. And it is thanks also to these color choices that Allen makes clear, for those who want to understand obviously, the assumption of this new work that had already made to declare to Mickey. We are witnessing a film whose screenplay has developed following the narrative canons of an aspiring writer soaked in the literature of the Fifties.