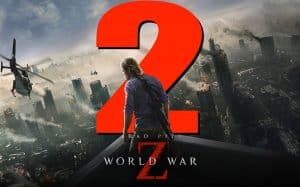 There is a story in history, about the first World War Z, that of his gestation, full of difficulties, until the last minute, to the point that even a partial final was shot, then filed and completely rewritten. But, however troubled, it is a happy story, very happy ending, because the film soon convinced, first the press, where the same magazines that had begun for months to question their quality quickly reversed after the vision in preview, and then the audience, which has yielded something like $ 540 million in total, reception that immediately turned on the green light for this second chapter.

The revisiting of the zombie, from slow to fast, and therefore more dangerous
The films, as it is known, sink the narrative roots in “World War Z: the world war of zombies”, the collection of fake interviews signed by Max Brooks, which tells of a global pandemic and a former United Nations agent – who at the cinema it is called Jerry Lane and the appearance of Brad Pitt – desperate for a vaccine. Brooks’ transposal for the big screen was far from obvious, being a complex operation in tone – halfway between geopolitical satire and docudrama – and in the structure, set to forty narrators of more than a dozen places in the world. Pitt, however, as a producer, seems to have a particular passion for books “infilmable” and also a particular insight in this sense (just think of Moneyball) and has hit another time. Among the novelties proposed by World War Z there is also and above all a real re-examination of the now archetypal figure of the Romance zombie, to which Forster’s film denies the legendary slowness of movements and reflections of the undead, transforming them into beings indeed they run fast and tend to reunite with each other and move in swarms. A feature that makes them more dangerous, more photogenic for the virtuous shots from above and, last but not least, closer to other creatures of sure film success such as vampires.