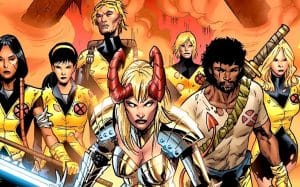 A spin-off of its own that further expand the universe of the X-Men, by introducing a new group of mutants. Director we find Josh Boone (Fault in Our Stars, The Stand) and production Simon Kinberg, one of the most influential producers in Hollywood (Cinderella, Survivor – The Martian, Deadpool), also involved in the implementation of the X-Men films: Apocalypse, another project inspired by the popular mutant Marvel.