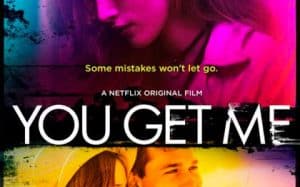 Tyler is a boy who believes he has found the love of his life in Alison. One evening at a party, however, Chase is also present, which spills Tyler for the promiscuous past of Alison in Chicago, of which he knew nothing. Tyler reacts aggressively and Alison, after a brief argument, tells him that it’s over. While leaving the party Tyler accepts a ride from Holly, a stranger who says she is alone and lives in a huge house, where the two spend an idyllic day. Returning home Tyler, however, contact Alison and she agrees to talk to him, so the two make peace. Everything looks fine, but Holly enrolls in their school …

I believe that many villains are misunderstood and therefore become bad, because nobody can understand them and they take it badly. My character, however, starts as someone with whom it is easy to sympathize and only then becomes more and more crazy.
Bella Thorne

Filmed between Los Angeles and the beaches of Santa Monica, You Get Me is a thriller starring young stars like Bella Thorne, emerged from the Disney Channel gymnasium, and Halston Sage, who after Nickelodeon’s apprenticeship has switched to Little Chills and will be in the Star Trek parody signed by Seth McFarlane, The Orville. Less followed by the public Taylor John Smith, which however boasts in the curriculum author series TV as American Crime and the next Sharp Objects with Amy Adams.