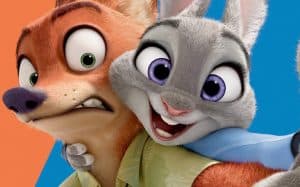 The animal world has changed: it is no longer divided into two between docile prey and fierce predators, but lived together harmoniously both. Judy is a bunny with great ambitions who dreams of becoming cop, because you have been taught that anything is possible in this new world. Nick is a fox who lives by his wits in the capital, Zootropolis, where Judy, after a grueling training at the academy, he arrived as auxiliary traffic. It’s up to them, unexpectedly united, solve the mystery of the 14 missing pets that the whole city is looking for and foil the plans of those who wants to take possession of local power, according to the atavistic principle of divide and rule.
Zootropolis, Disney board overseen by the omnipotent John Lasseter, tackles the most topical issue of all: the use of fear as a tool of government. And it touches another of the most sensitive topics in any era, or the existence (or not) of a biological predisposition to crime for some races and some ethnic groups. But it goes even further, by analyzing the relationship between mass and elite, as well as the chance (or not) to suppress the wild and instinctual nature sacrificing social order, flirting with the eternal dilemma of the training of individuals, and the company accounts more in the nature or culture.
In fact, the carrier speech is to self-determination in spite of its limited basic equipment: a speech that, by Monsters & Co in Planes Turbo, through much recent animation. It is the philosophy “Yes you can” that led to the American presidency and an African-American who is the roots of the (new) American dream. The corollary of this philosophy is the obstinacy “obtuse” Judy to “never give up”, because no one can tell what can be and not be, what you can and can not do.
Of course what counts in Zootropolis is the way these themes are developed, both at the level of narrative visual gimmicks. And if the script shows a seeding game of echoes and references too calibrated, the direction, the work of a team which also includes Jennifer Lee, the wonder woman behind Frozen, indulges in daring escapes, chases, explosions , battles and acrobatics through four distinct environments: rural, town, snow-capped peaks and tropical forest. But the real strength of the film is the escalation of jokes both in the interaction between Judy and Nick, born to create the perfect chemistry, both in the characterization of dozens of animal species, among which sloths used to drive (as proof that the bureaucracy is maddening at any latitude) and equine hippie dubbed into Italian by Paolo Ruffini. There are also the rodent citing the Godfather, the weasel selling fake CDs, the elephant yoga teacher, wolves howling out of turn, as dogs of Up “biologically” prepared to bet all their similar passage, the lion Mayor, musk buffalo police captain, even the gazelle superstar who has the voice and sensual movements of Shakira. All wear human clothes, they walk upright, spippolano on smartphones (which bear the symbol on the back of a bitten vegetable), communicate via Skype and downloading App to invent identities virtualil. Because the ideological assumption, for this and other cartoon (see Madagascar) is that the animal kingdom aspires to the anthropomorphic model of contemporary civilization: assumed that no animal, even dull, would probably share.